Any Summer Memories Left. Here's a Yankee Clipper from MommyBest!

Now that the Fall is racing by and everyone is settling into the "school in session" season, I'm reflecting upon what started out as an awesome Summer 2012--going into NYC for dining, mom play dates with friends, beach time and yes, I even went fishing for the 2nd time in my life. So when I had an accident in NYC only a few weeks into the summer, I was not a happy camper.
My girlfriend and I went into NYC for a day of fun when I injured my foot, leg and neck, in an accident, and--even worse than calling my family from the hospital to tell them this news--was explaining to my younger son I wasn't going to be able to take him and his friends to Lake Compounce the next day as I had promised. When I called Dylan from the hospital to share the details of my injuries--there was a long silence after he realized I wouldn't be able to go to the park the following day. His brother and his friends had just gone the week before so he wanted his just dos. My girlfriend was with me at the hospital, and the one salvation we had after the 7 hours at Lennox Hill was laughing many times that my son was more upset about Lake Compounce than my injuries : )
So what could make the summer even worse? The day after my accident, our younger son flipped his bike over and broke his clavicle in a "jagged split," according to the orthopedic who gave him a 6-8wk minimum recovery time. His entire back was skinned from the fall, and he couldn't find a comfortable position to sit much less sleep for weeks. One mom who has become a good friend of mine and our sons are also friends put it really well when she offered healing wishes adding, "How cruel for an active teenage boy to break his clavicle in the summer." No baseball, no sports at all--not even swimming."
Once Dylan was able to sit comfortably, we started going out for walks, having a few friends over--although it was quite challenging to create activities that would be nearly as fun as water slides, kickball and just plain summer craziness. We started doing day trips and going away for a few nights at a time. After four weeks into his healing, the doctor said he could start swimming before moving around to more challenging activities. And, of course, Dylan went with my husband, who was one of the coaches, to all the baseball games to support his team from the bench.
Dylan loves the Yankees! So, I wanted to take him to a special game. Since my older son had another event to go to and was active all summer--and especially since my husband is a Red Sox Fan ( Can you imagine our summer dinner conversations? The constant  jabbing and rival team trash talking), I wanted the game to be an activity for just the two of us.
We had an awesome time last year when we took the Yankee shuttle to see one of the ALCS game. I was able to buy the tickets last minute from a friend who lives in the city (Larry : )

There was an electricity in the air from the moment we boarded the packed subway car. Even though the chill in the air felt more like football weather, there was no mistaking that this was a baseball night to remember--A Yankee night for sure. The fans were jovially bouncing around, already spewing their victory chants against the Texas Rangers.
Walking into the winding trail from train stop into the stadium, the smell of chestnuts roasting filled the air and it was cold enough to blow smoke rings. It was jammed and the fans were jamming.
What a great start with the Yankees winning the first few innings. We were screaming and stomping our feet along with all the other fans. Then, one decision changed the direction of the game: A.J. Burnett intentionally walked a player, which was then followed by a home run, slammed by Bengie Molina. The game ended with a 10-3 loss for the Yankees.
Yes, we still had an amazing time, especially on the train rides there and back, listening to all the jokes and banter. But the ending was disappointing.
So, after a rough summer recovery, I also wanted to recover that Yankee loss and replace it with an ever bigger, more spectacular win. I found a Red Sox verses Yankees Sunday Night game, got tickets and surprised my son.  I admit I asked the man upstairs for some intervention because I wanted to have a winning memory.
I'm sure most moms can relate to supporting their kid's interests. Before I had my boys, I had no interest in baseball. But after becoming my boys' number one fan in all the sports they play, I also became a fan of their baseball team (not my husband's team lol).
Like wounded warriors, my son, with a broken clavicle, and me, limping along,  worked our way to what has become our favorite  seats: high behind home plate. We love to sit there because there's an awning to shield us in case it rains, is windy or too sunny. However, on this occasion, climbing high after filling our hands with sodas and treats, along with our injuries, caused much chaos trying to work our way to our seats. Other fans graciously tried to help us through the maze. Dylan and I were laughing so hard trying to maneuver our way up the stairs that we had to stop several times.
The game was amazing as the Yankees scored and the Red Sox didn't. We didn't want any surprises this time and began to have confidence that this game would be a winner. Highlights from the game included Hiroki Kuroda pitching a scoreless game and Ichiro Suzuki scoring two home runs, ending in a 4-0 victory. Now, that's what I'm talking about! 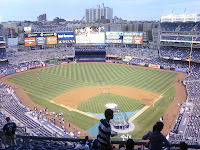 This time the trip home was even sweeter...until we arrived at the train station where screaming fans waited by the schedule board, looking for the number of which departure track we should board to get home. Only minutes before the train was scheduled to leave was the track number posted. Needless to say it was mayhem trying to keep my son's shoulder shielded as I clung to him down the stairs. We squeezed into a seat while many others weren't so lucky.
As people were scrambling, a dad yelled, "Could someone please move over so my son can sit down. He has a broken foot?" At that time, someone else yelled, "There's a few guys throwing up in the back of the train." The train didn't move for about 40 minutes--and still the boy with a broken foot was standing. I looked across from us, and there was an open seat between a woman and a young man who was in & out of his drunken stupor. His head kept falling on to the shoulder of the woman (who he didn't know) next to him. And she wasn't happy about it.
Again, the dad pleaded for someone to let his injured son sit down. So, as an advocate for children and having an injured son too, I stood-up and said, "let this boy sit down NOW!" The woman sitting next to the drunken boy moved over and let the young man sit down. He made an immediate friend when the inebriated boy now snuggled up to him. We were all laughing, and I asked him if I could take his picture for my blog, which I included.

Just another Yankee Clipper ride with me and my boy by my side!

Please share your views and any feedback...I invite all of you to follow a Real NY MommyBest-- who is just like you in so many ways : )

Promote Your Page Too

MommyBest: moms can only do their BEST!